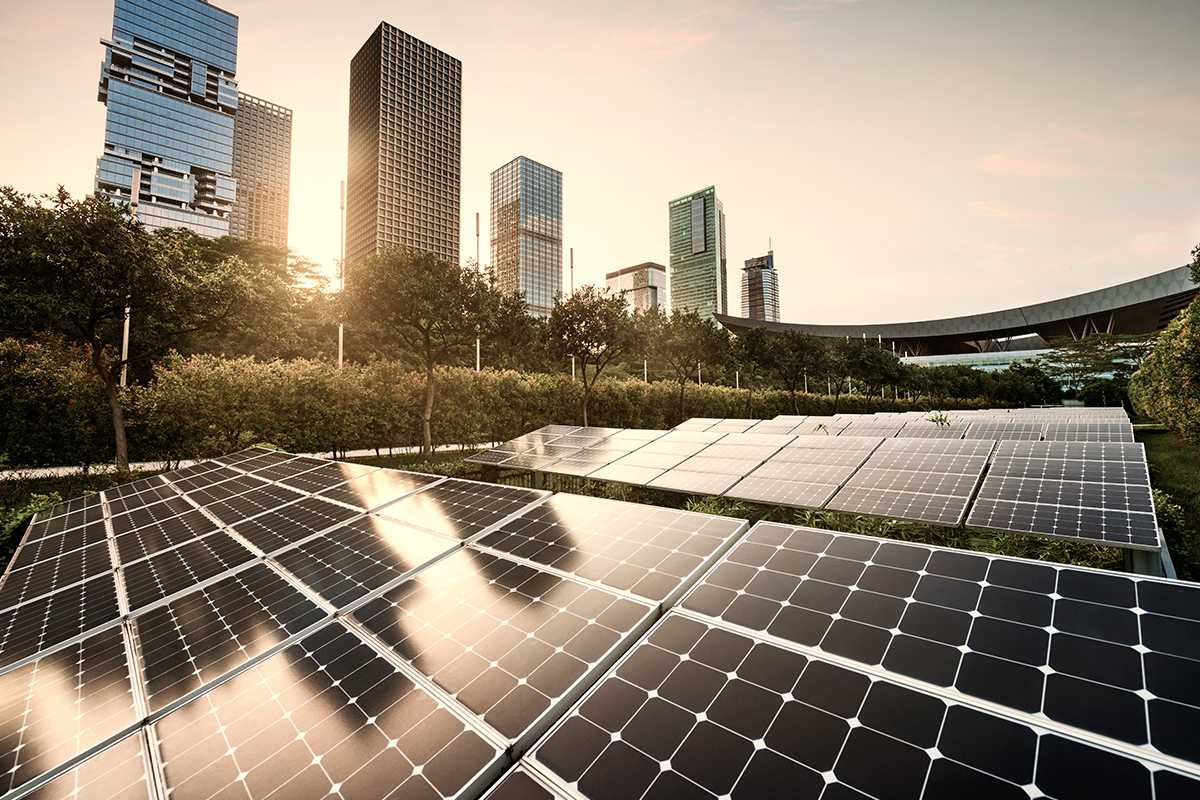 Solar energy is a popular energy option, and with good reason–it’s a sustainable way to power your home. Not to mention, it can save you money in the long run.

With so many types of solar panels on the market these days, how do you know which one is right for you? We’ve got all the information you need to make an informed decision about your home’s energy future.

Solar panels are devices that convert sunlight into electricity. They are typically made from a silicon solar cell, which creates an electrical current when exposed to light.

There are many uses for solar panels, including powering homes and businesses, charging batteries, and providing power for small electronic devices. They are becoming increasingly popular as renewable energy sources, as they do not produce greenhouse gases or other pollutants.

How Do Solar Panels Work?

Solar panels are devices that convert sunlight into electricity. They’re made up of a series of solar cells called photovoltaic cells connected with semiconducting material.

When the sun shines on the solar cells, they create an electrical current. This current is then sent to an inverter, which converts it from direct current (DC) to alternating current (AC). AC is the type of electricity that’s used in your home.

Solar panels are usually mounted on the roof of a home, although some homeowners install them on the ground. The angle at which they’re mounted will affect how much sunlight they receive and, as a result, how much electricity they produce.

There are two solar panel types: crystalline and thin-film. Both have their advantages and disadvantages, which we’ll go into more detail about below.

Crystalline solar panels are made of silicon, a very common element on Earth. In fact, it’s the same material used to make computer chips. They’re the most popular solar panel on the market and come in two types: monocrystalline and polycrystalline.

The first solar-powered building, Solar One, was built by the University of Delaware in 1973. By 1974, the federal government began taking a serious look at the role solar power could play in conserving energy. However, it wasn’t until 2001 that Home Depot started selling solar panels for residential use.

Monocrystalline solar panels are made of a single, large crystal of silicon that is cut into thin wafers and connected to create a solar cell. They’re typically black and the most efficient type of solar panel available today.

Monocrystalline solar panels are a great option if you have a small roof or want to maximize your energy production. However, they also have a higher price tag than other solar panels.

Solar panel manufacturers make polycrystalline solar cells by melting down large chunks of silicon and then cooling them to form small crystals. These tiny crystals are then connected to create a solar cell.

Polycrystalline solar panels are a good option if you have a large roof and want to save money on your purchase of solar panels.

CdTe solar panels arrived on the scene in 1972 and boasted a 6% efficiency rate. They are much more efficient now at 19% efficiency.

CdTe solar panels make use of a thin layer of cadmium telluride deposited on a substrate. They’re the most common type of thin-film solar panel and are quick and easy to manufacture. The layer is typically made with glass or metal and connected to electrical contacts, generating an electrical flow.

With CIGS solar panels, a thin layer of CIGS gets deposited on a glass or metal substrate. The CIGS are then connected to electrical contacts, which allow for the flow of electricity. They’re the second most common type of thin-film solar panel and are highly flexible, making them a great option if you have a unique rooftop.

The a-Si is the least common type of thin-film solar panel. They are made of a thin layer of amorphous silicon deposited on a glass or metal substrate. They’re the least efficient type of solar panel available.

If you have a large roof or want to install solar panels on a curved surface, thin-film solar panels are a good option. They’re also a good choice if you live in an area with a lot of cloud cover, as they’re less affected by shadows than monocrystalline and polycrystalline solar panels.

Are Solar Panels Right for Your Home?

Now that you know the types of solar energy available, it’s time to decide if solar is suitable for your home. Here are some things to consider:

If you’re unsure what solar module is right for your home, we recommend speaking to a solar panel expert. They can help you assess your needs and find the best option for your home.

What Are the Best Solar Panels for Your Home?

The best solar panels for your home depend on a few factors, including your budget, the size of your roof, and the amount of sunlight your home receives.

Thin-Film vs. Monocrystalline and Polycrystalline

Choose thin-film solar panels if you have a large roof, a small budget, and experience less sunlight than other areas. However, you will be trading efficiency and durability for convenience.

Solar panel efficiency measures the amount of sunlight that’s converted into electricity. The higher the efficiency, the more electricity a solar panel can produce.

Solar panel size is measured in watts. The higher the wattage, the larger the solar panel. Solar panels range in size from 50 watts to 400 watts.

Which Ones Are Most Attractive?

Still not sure? Type “solar panel pictures” into your web browser for a quick look at different solar panel images. Doing this will give you an idea of each type of solar panel.

Most solar panels have a 25-year warranty to protect against defects and performance deterioration.

Some manufacturers offer extended warranties for an additional cost.

You should also check your panels regularly for signs of damage, such as cracks or scratches.

Can Solar Panels be Recycled?

Solar plus storage systems are more expensive than traditional solar panel systems, but offer peace of mind and energy savings. They are becoming more popular as battery technology improves and the cost of batteries decreases.

You need to consider the installation cost and compare it to the cost of buying electricity from your utility company. To help offset the price, state and local governments offer incentives for purchasing and using solar panels.

Solar panels may not be the most suitable option for your home in certain instances due to age or tree cover. If there are trees near your property that shade your roof excessively, rooftop solar systems may not be the best choice.

The size, form, and slope of your roof are also factors to consider. Solar panels perform best on roofs with a slope of 15 to 40 degrees, although other roofs may also work.

Installing Solar Panels: Can I Do It Myself?

Once you’ve decided which type of solar panel is right for your home, the next step is to install them. Installing solar panels requires specialized training and equipment.

As such, it’s not something most homeowners should do themselves. A professional knows the ins and outs of solar panel installation.

If you live in an area with high electricity costs, installing solar panels may prove to be an eco-friendly way to save money. With the right solar panel system, you can produce all the electricity you need to power your home.

There are many incentive programs available to encourage homeowners to install solar panels. These incentives can reduce the cost of solar panel installation by 30% or more.

The federal government offers a tax credit for solar panel installations. The tax credit is 26% of the cost of the system, up to $2,000. State and local governments also offer incentives, such as rebates and tax credits.

LGCY Power does not offer advice on accounting or tax related matters. We recommend to all of our clients that they consult with a certified tax professional.

How Will Solar Panels Impact the Resale Value of my House?

Save Money in the Long Run

The amount of money you save by using solar panels depends on the cost of electricity in your area, the size of your system, and the amount of sunlight your home receives. Many homeowners save about 75% on their electric bill after switching to solar.

A Solar Panel System Will Eventually Pay for Itself

There are a few different options available for financing solar panels. You can pay for the system outright, take out a loan, lease the system, or use a power purchase agreement (PPA).

Paying for the system outright is the best option, as you’ll save on interest payments. However, not everyone has the upfront cash to pay for a solar panel system.

You can finance it with a loan if you don’t have the cash to pay for a solar panel system outright. Many types of loans are available, so you’ll need to compare options to find the best rate.

At the end of the lease, you have the choice to purchase the system or renew the lease.

A PPA is a type of financing that allows you to pay for the electricity that your solar panel system produces. With a PPA, you enter into an agreement with a solar developer. The developer owns the solar panel system and is responsible for maintenance and repairs.

You agree to purchase the electricity that the system produces at a fixed rate for a set period. After the contract expires, you can renew the agreement or purchase the system outright.

Solar power is one of the fastest-growing energy sources in the world. And there’s a good reason for that. Solar energy is a renewable resource used to generate electricity, heat water, and even power entire homes and businesses.

Knowing about the different types of solar panels available is the first step to getting started with solar. Now you can start shopping for the perfect solar panel system for your home!

Making the switch to solar power has never been more accessible or affordable. At LGCY Power, we have a deep understanding of solar power and what it takes to make the switch.

We’ll work with you to develop a custom solar plan that fits your needs and budget. We’ll handle all the details, from paperwork to installation.

So if you’re ready to make the switch to solar power, fill out a simple form to receive a free estimate, or give us a call today for a free quote.

19 Ways To Save Energy and Money for Homeowners