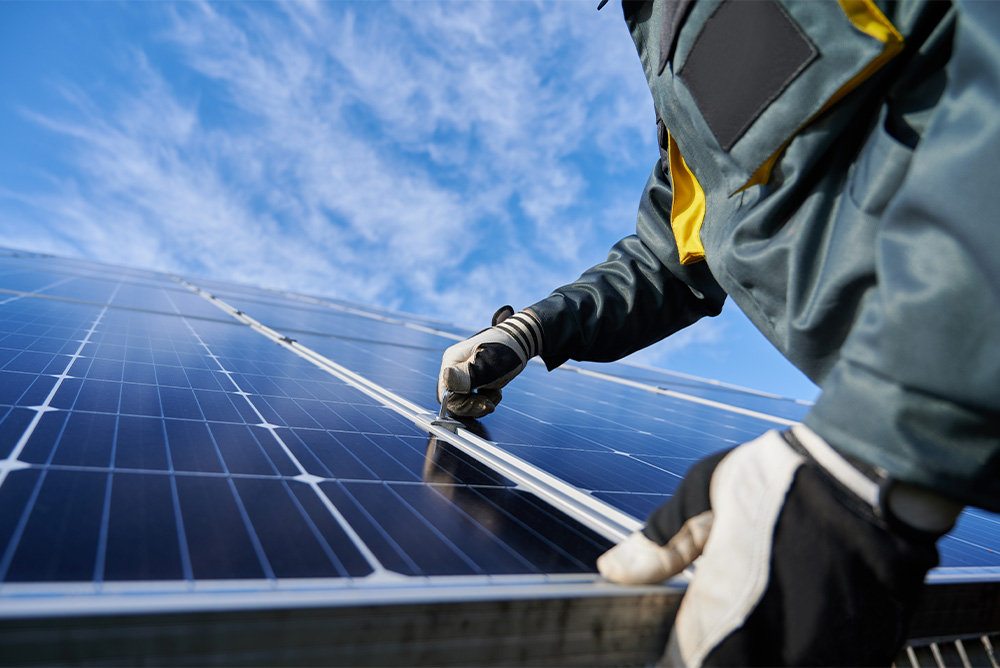 Solar energy has some clear-cut benefits that contribute to this resource’s ever-increasing popularity and help pave the way toward our society’s clean-energy future. For starters, solar power is an environmentally friendly energy source that can help keep our planet green and healthy for generations to come.

In addition, as the costs of solar energy decreased over the years, this resource develops some economic benefits as well. In this article, we’ll break down the environmental and economic advantages of solar power, as we examine the reasons homeowners and business owners alike are embracing this clean and renewable form of energy.

Let’s start by taking a look at the environmental impacts of solar energy. First and foremost, solar power drastically cuts the amount of air pollution caused by fossil fuels. While solar panels produce a clean form of energy that doesn’t release any harmful chemicals into the air, this is certainly not true of coal or gas-fired power plants, which are responsible for much of the unhealthy air and smog in our environment today.

By installing solar panels, we also reduce the overall demand for energy based on fossil fuels, which has wide-reaching benefits that go beyond direct contributions to pollution. When we decrease our dependence on fossil fuels, we avoid using up the rest of these nonrenewable energy sources. Someday, we will run out of oil and gas forever — switching to solar power helps us delay the day we use up our supply of fossil fuels.

Of course, these factors all contribute to a greater cause, which is solar energy’s ability to prevent man-made climate change. The more we rely on fossil fuels to provide our power, the more carbon dioxide and other polluting chemicals we pump into our atmosphere, which contributes to dangerous shifts in our climate.

Solar energy has some big advantages over other forms of power generation as well, even those that don’t use fossil fuels. For example, hydroelectric power plants and nuclear plants both use a tremendous amount of water to generate power, which often creates the need for dams to guide the flow of water.

Dams can have a significant negative impact on the environment, as lakes and rivers are diverted from their natural water flows to supply hydroelectric or nuclear power plants, causing many problems for the local flora and fauna. Furthermore, nuclear plants have the potential for meltdowns and the issue of nuclear waste disposal, which obviously aren’t problems with solar panels either.

In addition to the positive environmental impacts of solar energy, there are economic benefits as well. To begin with, solar power is a job creator. Because this form of energy requires more human labor than the largely automated fossil fuel technologies, solar power generates more jobs than coal or gas. In fact, nearly 3.3 million Americans work in clean energy, including roughly 335,000 in the solar industry alone. By comparison, just 211,000 Americans have jobs based on mining and/or extracting fossil fuels for power generation.

Solar also has a big advantage when it comes to cost per kilowatt-hour. It wasn’t that long ago that solar energy’s major problem was cost — as recently as 2006, solar power cost nearly one full dollar per kilowatt-hour. Today that price point has dropped to around four cents, which is actually slightly cheaper than coal and gas power, which typically cost somewhere between four and five cents per kilowatt-hour.

There are several reasons for this price decrease, starting with the fact that companies manufacturing solar panels found ways to produce their panels more efficiently over the last decade. As technology improved, the government sweetened the pot with subsidies to help drive down costs even further. Today, solar power is actually the cheapest form of energy generation in the world.

Despite the numerous environmental and economic benefits of solar energy, it still accounts for just 72 billion kilowatt-hours per year in the United States, which comes to just under 2% of the nation’s total energy generation. However, if you break down the statistics into year-by-year figures, you can see that solar energy use is growing rapidly. In 2019 — and into the first quarter of 2020 — 40% of all newly developed power generation capacity in the U.S. came from solar, and industry experts expect solar market growth of around 33% in 2020.

This is a great time to join the solar revolution and help lead America into a clean-energy future, so contact LGCY Power to see how we can help. If you want to produce your own solar energy at home or at work, call one of our experts today to discuss your options.