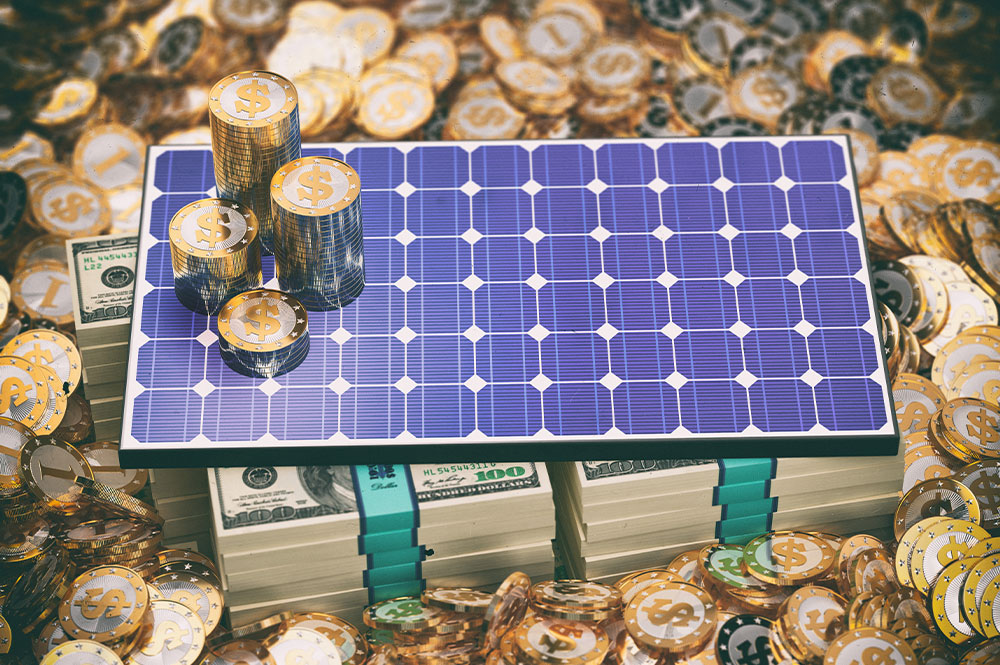 Back in the day, going solar required a massive upfront investment, which made it only accessible to wealthy households.

These days, however, pretty much everyone can enjoy the energy savings and many other benefits of making the switch, thanks to the significantly lower cost of acquisition and the availability of different payment plans.

But before we get to that, let’s first take a look at how much solar panels cost today—at least on paper:

How much do solar panels cost: the short answer

But why the massive range? Well, that’s because there are several factors that dictate how much you need to shell out to install solar panels on your roof, including:

Let’s take a closer look at the last item on the list:

But don’t let the price tag turn you off. There’s a reason—two to be exact—monocrystalline panels are quite expensive: they’re more efficient and durable than other alternatives.

Simply put, when you invest in a monocrystalline system, you’ll not only need fewer panels to generate the power you need, you’ll also be able to save money on electricity for a longer time.

But what if monocrystalline panels are really out of your budget? Well, this is where the second option comes in:

While slightly less durable and efficient than their monocrystalline counterpart, polycrystalline solar panels are also more affordable, coming in at just $0.70 to $1 per watt. This means a 10kW setup would cost you anywhere between $7,000 and $10,000.

Now, if you want something that’s cheaper per watt than polycrystalline panels but more efficient than monocrystalline ones, then PERC solar panels may be the best option for you.

Short for “passivated emitter rear cell”, PERC panels cost just $0.32 to $0.65 per watt and are designed to absorb more sunlight than both monocrystalline and polycrystalline panels.

But that’s not all. They’re also designed to handle extreme heat better. Behind the main cell of a PERC panel, you’ll find another layer that prevents excess sunlight from heating up its back sheet, which, in turn, keeps the system operating at peak capacity.

But the excess sunlight doesn’t go to waste either. It gets reflected back to the panel’s main cell, increasing the total amount of solar energy the system absorbs.

The actual per-watt cost of thin-film solar panels ultimately depends on the type you get.

Despite their significantly lower price tag, however, they’re also the least efficient option out of the four—and they’re bigger too. This means you’ll not only need more panels to meet your energy requirements, you’ll also need a massive roof to house all of them.

This is why this particular type of solar panel is used more for industrial applications than residential ones.

But what about the other factors?

Aside from the per-watt cost of the type of solar panel you decide to go with, you also need to consider how many panels you’ll need to generate the power you require—and then subtract any applicable tax credits and rebates to the total cost.

In addition to the cost of acquiring the system, however, you’ll also need to take into account the cost of labor, which goes up or down depending on two primary factors:

This is why it’s important to check whether your home qualifies for a solar upgrade first before doing everything else.

As a general rule, you need to have a south-facing roof that’s not in the shade of nearby structures or trees and has a slope between 15 and 40 degrees to ensure your solar panels get the most sunlight throughout the day.

In addition, your roof also needs to be big and sturdy enough to accommodate the number of panels you need to meet your power requirements.

But don’t worry. You don’t have to do the checking yourself. In fact, it’s better to just have a solar specialist do it for you to ensure everything is in order before you proceed. This way, you can avoid costly issues and redos down the line.

Is there a way to bring down the upfront cost of solar panels?

Absolutely! You have three options: solar loans, solar lease, and solar PPA. Let’s take a closer look at each one:

A solar loan works pretty much like any other type of loan: it allows you to acquire your solar energy system via a payment plan. The only difference is that with solar companies such as LGCY Power, it also gives you access to the following benefits:

Just like a solar loan, a solar lease also eliminates the upfront cost of going solar. The only difference is that you don’t get to own the system. In fact, if you get one from LGCY Power, you’ll also get access to the exact same benefits as with a solar loan.

Finally, a solar PPA—short for power purchase agreement—also completely takes upfront costs out of the equation, but instead of requiring you to pay monthly to own or rent the system, you’ll only pay for the amount of power you generate.

The benefits you get, if you decide to work with LGCY Power, are also exactly the same.

But is solar worth the investment?

Of course, even if it’s now easier than ever on the budget to make the switch to solar, the question is: is it actually worth doing?

Well, let’s first take a quick look at its benefits so you can decide for yourself:

First, as we’ve seen earlier, going solar gives you access to different government incentives. Depending on the state you live in, this can include things such as tax credits and rebates.

Second, in some states, energy companies are also required to either pay you with cash or credit for any excess power your solar energy system generates. In this setup, you’re essentially making money by selling energy back to the grid.

Third, aside from the energy savings, fitting your home with a solar energy system also bumps up its value. Depending on where you live, this could translate to an extra several thousand dollars on top of your home’s current price tag.

And finally, on top of all the financial incentives, going solar also gives you and your family access to several non-monetary benefits, including:

Let’s take a closer look at each one:

Second, going solar also minimizes our need to rely on fossil fuels for our energy needs. The result? Cleaner air for everyone, thanks to less harmful fumes and excess carbon dioxide being released into the atmosphere.

Finally, as you probably already know, the price of oil in the global market is extremely volatile. There are just too many economic and political factors that can cause it to suddenly skyrocket.

With fewer households relying on fossil fuels, the need for our country to pay other countries to import them also decreases, resulting in improved economic security for everyone.

So, now that you’ve seen all the benefits of making the switch to solar, it seems like a pretty good investment, right?

If you wish to know more about fitting your home with a solar energy system, just book a no-obligation free consultation with one of our solar panel consultants. We’ll be happy to answer all your questions and guide you every step of the way in case you decide to proceed with the upgrade.