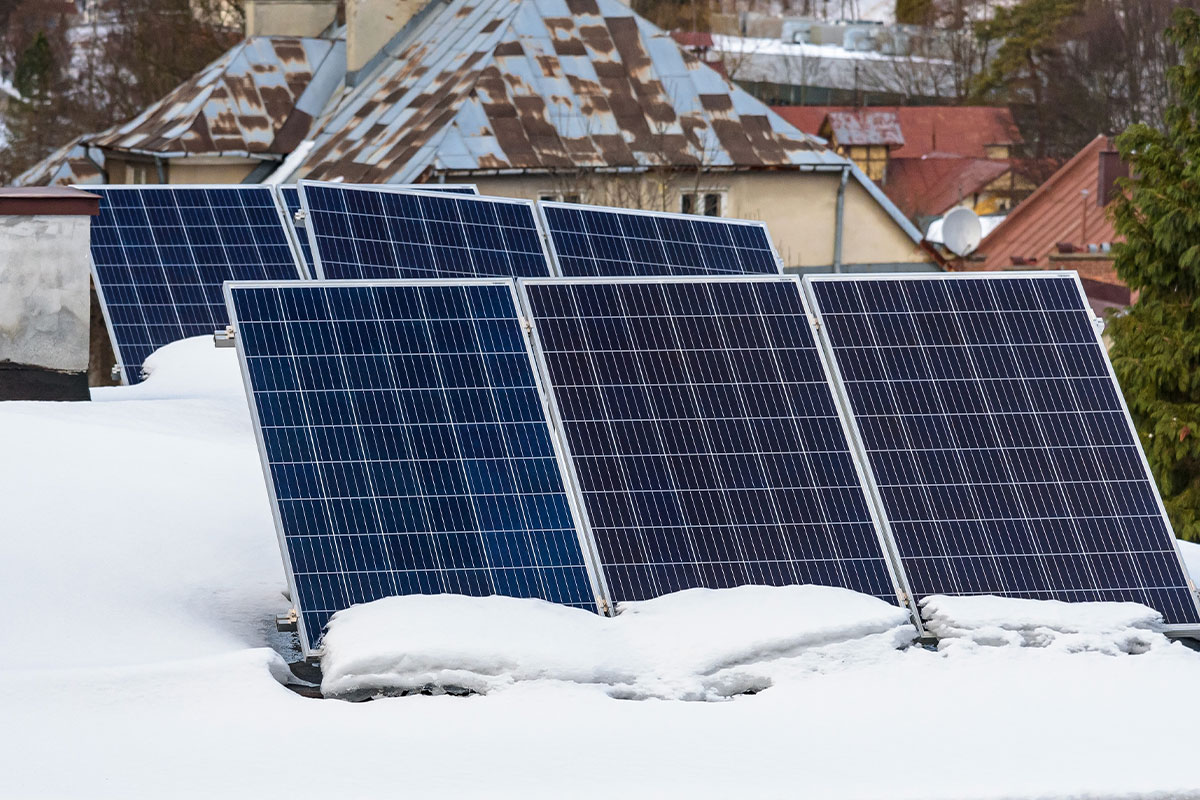 Today’s solar panels are far more efficient in a wide variety of weather conditions than the panels of yesteryear. However, there are still some situations where you could experience decreased output from your residential solar system. One of the most common weather events that affects efficiency is snow on solar panels. How much does snow accumulation decrease your solar system’s energy efficiency? And how do you clean snow off solar panels? Let’s dig into the details.

First off, let’s correct one of the most enduring myths about solar panels. Many people think that solar panels and snow don’t mix well. In actuality, your typical solar panel is manufactured to withstand at least two feet of snow, and most of them go well beyond that level. Considering that solar panels also function quite well in cold weather, there is little-to-no risk of your panels becoming damaged by snow or other wintery conditions.

How do solar panels work with snow on them? While it’s unlikely that your solar panels will be damaged by winter weather, it is true that heavy snowfall can block sunlight from reaching your panels. Because your solar system needs direct sunlight to produce energy, this can have a negative effect on your electricity generation.

However, before you jump up on the roof and start brushing the snow off of your solar panels, you should check with your solar manufacturer. Some solar companies will void your warranty if you remove snow from your panels yourself. If you get the go-ahead from your manufacturer, you can try either sweeping them using a roof rake or a long-handled brush, or you could blast them with water from a hose to melt the snow away.

How To Remove Snow From Solar Panels

Use The Cold Water Method

If you choose the water method, make sure you use cold water, as the temperature differential between cold snow and hot water could crack the glass on your panels. Furthermore, anyone sweeping or raking snow from solar panels should attach a soft cover to make sure you’re not scratching the glass. You should also never use RainX, car wax, rock salt, or other chemicals on solar panels, as all of these materials can cause damage to not only your solar system but also the shingles and other structures on your roof.

That said, there are some more advanced methods regarding how to remove snow from solar panels on the roof. One option is a relatively recent innovation known as an autonomous solar panel. These panels can sense when there’s snow cover, and they transfer a small amount of energy in the form of heat to clear away the snow. In addition, the Minnesota-based “Solar for Snow” organization recently won a $50,000 prize from the National Renewable Energy Laboratory for their plan to produce solar panels that include nano-materials to self-heat snow-covered panels.

Wait For It To Melt or Slide Off

To be honest, sometimes the best way to get rid of snow on solar panels is to simply wait for it to melt or slide off. Unless there’s a significant amount of caked-on snow cover preventing your solar system from accessing sufficient sunlight, it’s unlikely that you’re losing a significant amount of production. Especially if your solar panels were installed at an angle of 35 degrees or greater, it won’t take much warming to loosen the snow enough to fall off.

As with most aspects of solar panel maintenance, if you have concerns about the buildup of snow on solar panels, you should ask a professional. Our LGCY Power representatives can tell you everything you need to know about how to get snow off of solar panels, and they can also help you figure out the best way to avoid too much snow buildup in the first place.

While solar panels and snow don’t exactly work in harmony, the negative effects of snow on solar panels can be a bit overblown. You might lose a bit of production here and there, but for the most part, it shouldn’t significantly decrease the energy generation from your residential solar system.