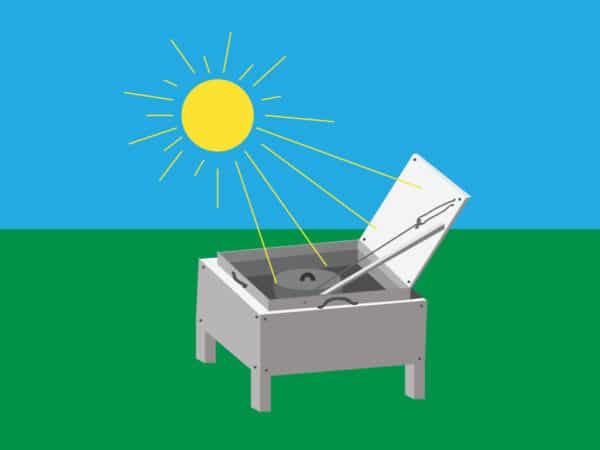 Solar energy is readily available, and it’s possible to capture this energy to use in numerous ways. Because solar energy is renewable, it is an important part of clean energy plans for the future. Although you might immediately think of using solar panels to power buildings and provide heating and cooling, it’s possible to use solar energy for other purposes as well. Harnessing solar energy for cooking is known as solar cooking. Solar cooking is a viable option both at home and on the road, and kids can participate in this alternative cooking method, too.

What Is Solar Cooking?

How Does Solar Cooking Work?

Solar energy is the power source for solar cookers. The electromagnetic waves given off by the sun can cause the molecules inside matter to vibrate, producing heat. Solar cookers capture and harness this heat to cook. A solar box cooker has a box that works like an oven. Reflectors outside the box direct and collect sunlight so the box gets hot inside, and food inside the box cooks. A solar box cooker may get as hot as 300 degrees Fahrenheit. Parabolic cookers have curved surfaces that focus more sunlight on a small area. A parabolic cooker can get up to 400 degrees Fahrenheit, which is suitable for baking bread or frying food. Panel cookers are smaller and lighter than box cookers, making them ideal for solar cooking while traveling. These cookers have a small box oven, and you place the cooking pot in a plastic bag that traps the heat.

You can cook your meals at home with a solar cooker with just a little preparation. The best days for solar cooking are days when the sun is bright and there are few or no clouds. If there are a few thin clouds, allow extra time for cooking. Pay attention to how the sun tracks across your yard so you know where to position the solar cooker. For maximum efficiency, place the cooker in a spot where it faces directly into the sun. Be ready to adjust the solar cooker every one to two hours to keep it in direct sunlight.

Solar Cooking on the Road

When traveling or camping, solar cooking is a great way to cook food. Use a panel cooker; it’s lighter and smaller than other types of cookers. Expect cooking a meal to take between two and four hours on a sunny day. One simple cooking method uses one-quart glass jars. Paint the outsides of the jars to darken them, leaving one strip of glass clear so you can monitor the cooking progress. Drill a hole in the lid for venting.

Kids have a natural curiosity about science, and you can easily involve them in every part of the solar cooking process. You can make a homemade solar box cooker out of a cardboard box, aluminum foil, and a few other materials. Cooking hot dogs or s’mores in a solar oven is relatively simple. It’s even possible to make pizza in a solar oven.

Anything you can cook in a slow cooker is ideal for cooking in a solar oven. Depending on the style and features of a solar cooker, it’s also possible to fry and bake with one. Choose a bright, sunny day for best results. Plan ahead when you know you want to cook so you have plenty of time.